September 20, 2019
One common and long standing security issue around automation is the physical storage of the credentials your script needs to get, whatever task your trying to automate done. The worse thing you can do from a security point of view is store them as plain text in the script (and there are still plenty of people out there doing this) a better option is to do some encryption (making sure you use the Windows Data Protection API) eg https://practical365.com/blog/saving-credentials-for-office-365-powershell-scripts-and-scheduled-tasks/ . Azure also offers some better options with ability to secure the credentials and certificates in RunBooks, so it is just a few clicks in the Gui and some simple code to secure your credentials when using a RunBooks.

In this post I’m going to look at the issues around storing and accessing SSL certificates associated with App only token authentication that you might be looking to use in Automation scripts. This is  more for when you can’t take advantage of Azure Runbooks and need the flexibility of a VM.

In Exchange (and Exchange Online) EWS Impersonation has been around for quite some time, it offers the ability to have a set of credentials that can impersonate any Mailbox owner. With the Microsoft Graph you have App Only tokens which offers a similar type of access with the additional functionality to limit the scope greatly to certain mailboxes and Item types . With App Only tokens you don’t have a username/password combination but a SSL certificate or application secret (the later should be avoided in production). So instead of the concern around the physical security of the username and password combination, your concern now is around the security of the underlying certificate.

One of the most important points is the time to start thinking about the security of the certificate is before you generate it. Eg just having a developer or Ops person generate it on their workstation leaving copies of the certificate file anywhere is the equivalent of the postit note on the monitor. This is where the Azure KeyVault (or AWS KMS) can be used to secure both the creation of the certificate and provide the ongoing storage and importantly Access Control and Auditing. So from the point of the creation of the AppOnly cert you should be able to have an audit trail of who created it and who accessed it. The other advantage of having the cert in a KeyVault is that it also makes it easy for you to have a short expiry on the certificate and automate the renewal process which in tern makes your

Once the authentication Certificate is stored in the KeyVault then the weakest link can be the authentication method you then use to access the KeyVault. Eg a user account can be granted rights to the KeyVault (which then make that user account the weakest link) or you could use another Application secret or SSL Certificate to secure access to the data plain of the KeyVault. At some point all of these become self defeating from a security point of view as your still storing a credential (especially if you then store that as plain text) and for a persistent threat actor this still leaves you exposed.

One way of getting rid of the storage of credentials is the use of Managed identities where (“in my mind at least”) your trusting the infrastructure where the code is running. The simplest example would be say you create an Azure compute function and give that function a Managed identity, you can then grant that access to the KeyVault and your function can now access the certificate from the KeyVault and then authenticate to Azure and access every Mailbox in your tenant. So now you have placed the trust in the code in the function and the underlying security of the function (eg can the code be exploited, could somebody hack the deployment method being used and replace the code with their own Etc). With a System-assigned managed identity in an Azure VM your doing the same thing but this time the point of trust is the Azure Virtual Machine. So now its down to the physical security measures around the Azure VM which becomes the weakest link. Still not infallible but your security options around securing VM are many, so with good planning and practice you should be able get a balance between flexibility and security.
So lets look at a simple implementation of using a System-assigned managed identity in a Azure VM in a Powershell Script to get a SSL Certificate from a KeyVault and then access the Microsoft Graph using an AppOnly token generated using that certificate. 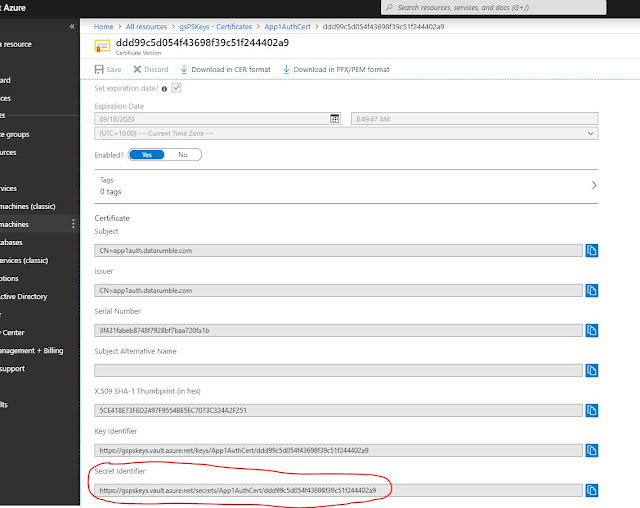 The endpoint is available at a well-known non-routable IP address (169.254.169.254) that can be accessed only from within the VM

So the above script uses this local Metadata Service to acquire the access token to access the Azure KeyVault (as the System-assigned managed identity). One you have the certificate raw data from the KeyVault you can then load it into a Typed Certificate Object eg

The last step is the certificate must be uploaded to the Application registration created in step 2 or added to the application manifest either manually or pro-grammatically. eg the following is an example to produces the required manifest format described here https://docs.microsoft.com/en-us/azure/active-directory/develop/active-directory-certificate-credentials

This puts the certificate data into a file temporarily which isn’t great you can actually use the Graph API to create an app registration and add the cert data directly which means the cert data never needs to be export/import into a file.


Authenticating with the SSL Certifcate you retrieved from the KeyVault


The ClientId is the ClientId from the application registration in step 2 the following does the Authentication using the configuration information from the above and then makes a simple Graph
request that uses the App Only Access Token that is returned.

A Gist of the full script can be found here