August 23, 2017
Outlook and OWA allow you to create "Favorites" shortcuts to Public folders (and other folders for that matter) to make accessing them a faster experience. 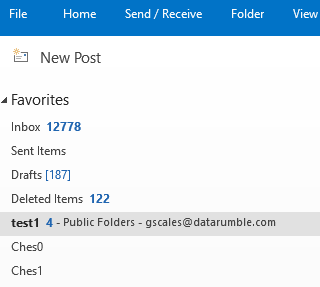 For those of us keeping pace with grinding Public Folders into dust (personally no longer a fan) and replacing them with Groups, it maybe useful to report on which Public Folders people have Favorited in their mailboxes for a metric and impact point of view. This information should then come in useful if your planing on migrating them (or just for a laugh). Because Public folder hierarchies are relatively complex having the path to the Public folder rather then just the name is generally a lot more useful. So in the script in this blog post we will look at producing a report of the Public Folder favorites and the Path of the Public Folders those shortcuts refer to eg it will produce a report something like the following for each mailbox you where to run it against.

Like other mailbox shortcuts these favorites are FAI (Folder associated items) stored in the Common Views Folder in the Non IPM Subtree folder of a Mailbox. Other names for these items are wunderbar or navigation shortcuts and are documented in https://msdn.microsoft.com/en-us/library/ee157359(v=exchg.80).aspx

EWS allows relatively easy access to FAI items in a Mailbox folder by using an Associated Item traversal in the FindItems operation. eg

To restrict the query to just returning those items that are public folder shortcuts you need to put a restriction on the  PidTagWlinkFlags property.

The actual properties on the FAI Items must be accessed using extended properties in EWS which are documented in the Exchange protocol document linked above. To work out the path to folder you need to get the PidTagWlinkEntryId property which returns the EntryId of the PublicFolder that the shortcut points to which you then need to convert to an EWSId to access the Public Folder in question. However it is not quite as straight forward as this because the EntryId that is returned by this property isn't convertible with EWS ConvertId operation because of one of the flag properties used. So some transposition of the EntryId is required, because the EntryId format is documented here https://msdn.microsoft.com/en-us/library/ee217297(v=exchg.80).aspx transposing out the incompatible flags so the EntryId can then be used in EWS's convertId operation isn't that hard. eg

I've put a copy of this script on Git hub https://github.com/gscales/Powershell-Scripts/blob/master/GetPfShortCuts.ps1

January 19, 2018
Quite recently the Reporting side of the Graph API has moved in GA from beta, there are quite a number of reports that can be run across various Office365 surfaces but in this post I'm going to focus on the Mailbox related ones. Accessing Office365 Reports using Powershell is nothing new and has been available in the previous reporting endpoint  https://msdn.microsoft.com/en-us/library/office/jj984326.aspx however from the end of January many of these cmdlets are now being depreciated in favour of the Graph API  https://msdn.microsoft.com/en-us/library/office/dn387059.aspx . Prerequisites  In comparison to using the Remote PowerShell cmdlets where only the correct Office365 Admin permissions where needed, to use the new Graph API reports endpoint you need to use OAuth for authentication so this requires an Application Registration  https://developer.microsoft.com/en-us/graph/docs/concepts/auth_overview  that is then given the correct oAuth Grants to use the Reports EndPoin
Read more