April 17, 2018
There's a old saying that a tradesmen is only as good as their tools and the same can be said for ITPro's and developers. You can save yourself a lot of time when investigating particular tasks you want a script by having something ready built that can do 90% of task at hand.  I've decided to share a script that I use quite often during the investigation phase of any EWS scripting tasks that allows you to generically grab a folder (or collection of Folders) and the Items within those folder. While this is something that can be put together quite quickly together using snippets there always tends to be extra properties that you need for different tasks so the generic script I'm showing today includes all the niceties kind of like having the right sized spanner rather the shifter.

So the script in question can be found on GitHub here https://github.com/gscales/Powershell-Scripts/blob/master/GenericFolderAndItem.ps1

So what can it do

Connect and show the properties on a Mailbox Folder eg 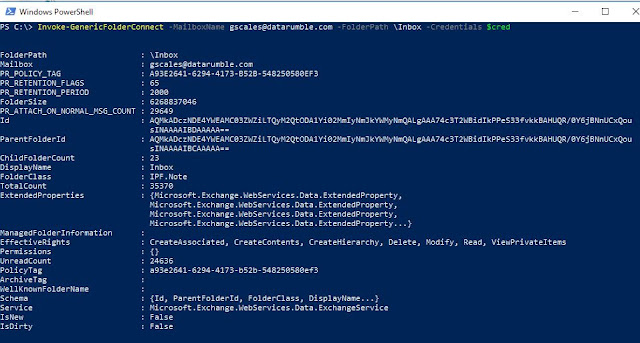 So in the above example this is my Inbox, some of the extra things I've added in this script over what you would normally see in EWS is to promote the ExtendedProperties for the retentionTags,FolderSize,FolderPath and AttachmentCount to first class folder properties on the object so they are much easy to first view but to also script on top off. Eg say I only want to look at the Inbox and Subfolders of the Inbox there where larger then 10 MB I can do the following

The above examples uses the -Recurse switch parameter of the script to recurse Subfolders of the pass in folder Path you connected to and then makes use of those promoted properties using the pipeline and Where-Object in PowerShell.

One other thing I've added to the Standard EWS FolderObject is the GetLastItem ScriptMethod which does what is says by getting the last item in a folder. For example if I wanted to get the Last Item in My Inbox I could use the following 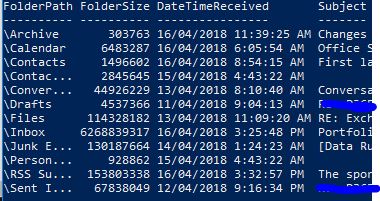 As I've show above getting the Last Item in a folder can be useful but a lot of the time you will want to enumerate all the Items with a folder (or a least the Top X) to do particular reporting or investigation tasks. To do you use the following generic function which will give you back all the items in the Inbox.

To  limit the results to just the top 10 items in the Folder use the -MaxCount switch eg
EWS by default only returns certain properties while doing an item enumeration (using findItems) so things like the Recipients and the Message body wont be returned by default for performance reasons. If you wanted to view these properties on a Message you could use the Load() method on the Message itself or you can use the -FullDetails Switch which will batch these operations which will make it perform better if you have a large number of items that you wish to do this on. Eg to show the last 10 messages in the Inbox with FullDetails

If you want to recurse though Subfolders eg to show the top 5 messages for the Inbox and its subfolders use something like
Like the Generic EWS Folder Object I've added some properties and methods that I've found useful. The first is the FolderPath which is useful when doing a recursion and reporting and I've also added one script method on objects called DownloadAttachments that will allow you to download all the attachments on an Item to the directory you pass in. eg  To download the attachments from the last item in the Inbox use

Unlike like a normal spanner which is literally forged in steel this tool can be updated as you go but adding in extra properties or methods that you find useful as you go. If you find the script useful and what to share any of you updates please submit them to the GitHub repo https://github.com/gscales/Powershell-Scripts/issues

August 18, 2020
As well as EWS and Remote PowerShell (RPS) other mail protocols POP3, IMAP and SMTP have had OAuth authentication enabled in Exchange Online (Official announcement here ). A while ago I created  this script that used Opportunistic TLS to perform a Telnet style test against a SMTP server using SMTP AUTH. Now that oAuth authentication has been enabled in office365 I've updated this script to be able to use oAuth instead of SMTP Auth to test against Office365. I've also included a function to actually send a Message. Token Acquisition  To Send a Mail using oAuth you first need to get an Access token from Azure AD there are plenty of ways of doing this in PowerShell. You could use a library like MSAL or ADAL (just google your favoured method) or use a library less approach which I've included with this script . Whatever way you do this you need to make sure that your application registration  https://docs.microsoft.com/en-us/azure/active-directory/develop/quickstart-register-
Read more

October 01, 2020
As the information on how to do this would cover multiple posts, I've bound this into a series of mini post docs in my GitHub Repo to try and make this subject a little easier to understand and hopefully navigate for most people.   The Binder index is  https://gscales.github.io/Graph-Powershell-101-Binder/   The topics covered are How you can access the Recoverable Items Folders (and get the size of these folders)  How you can access and search for items in the Deletions and Purges Folders and also how you can Export an item to an Eml from that folder How you can Restore a Deleted Item back to the folder it was deleted from (using the Last Active Parent FolderId) and the sample script is located  https://github.com/gscales/Powershell-Scripts/blob/master/Graph101/Dumpster.ps1
Read more

Using the MSAL (Microsoft Authentication Library) in EWS with Office365

October 04, 2019
Last July Microsoft announced here they would be disabling basic authentication in EWS on October 13 2020 which is now a little over a year away. Given the amount of time that has passed since the announcement any line of business applications or third party applications that you use that had been using Basic authentication should have been modified or upgraded to support using oAuth. If this isn't the case the time to take action is now. When you need to migrate a .NET app or script you have using EWS and basic Authentication you have two Authentication libraries you can choose from ADAL - Azure AD Authentication Library (uses the v1 Azure AD Endpoint) MSAL - Microsoft Authentication Library (uses the v2 Microsoft Identity Platform Endpoint) the most common library you will come across in use is the ADAL libraries because its been around the longest, has good support across a number of languages and allows complex authentications scenarios with support for SAML etc. The
Read more
All sample scripts and source code is provided by for illustrative purposes only. All examples are untested in different environments and therefore, I cannot guarantee or imply reliability, serviceability, or function of these programs.