July 19, 2018
Folder Item numbers, size's and Attachment Item Numbers, types and sizes are one of the Mailbox statistics that is useful when your trying to look at how and why a mailbox is growing or why your mailbox performance might be declining if you have a large number of folder items. With the recent increases in Mailbox size quotas  in Office365 it can be easy to become quite indifferent to how quickly your mailbox might be growing. For example if you have 100GB quota the lazy mindset (which I admit to being a part of) can be to just keep everything you get via mail (or stack it and rack it). If your users are not able to take advantage of cloudy attachments (or the users refuse to change their use habits) the nature of expanding file sizes means a sharper growth curve for Folder Items and Attachments.
The traditional way of tracking Mailbox sizes is to use Get-MailboxStatistics and Get-MailboxFolderStatistics for which there are many good scripts around that give a good overview of what is in a Mailbox or Folder. For a deeper dive into what  is in messages in a particular folder where you are seeing growth then using a Mailbox API like EWS (or REST) can be useful. In the past I've posted a few scripts for doing Attachment and Item level statistics which where in need of

For this script I've used EWS as it is universal across OnPremise and Office365 from Exchange 2010 up. I do have two different versions of this script however because Office365 and Exchange 2016 allows you to have reference attachments (cloudy attachments) so some slightly different code is needed and the latest compiled version of the EWS Managed API which is only available from GitHub is needed so statistics can be compiled successfully for these type of Attachments. For the Item level processing side of the script it will process every item in a folder firstly using the EWS FindItems operation which will return a minimal results set of Items and Sizes and then for those items with Attachments another batch operation is used to get the metadata for the attachments which will include the Attachment name (which we can then derive the attachment type from using the file extension name) and the size of the attachment. If its a cloudy attachment then this is processed separately. I haven't included any code to call out to OneDrive to get the filesize for the cloudy attachments but its possible to do this with some extra code (generally you would want to do this asynchronously while processing the Exchange attachments). 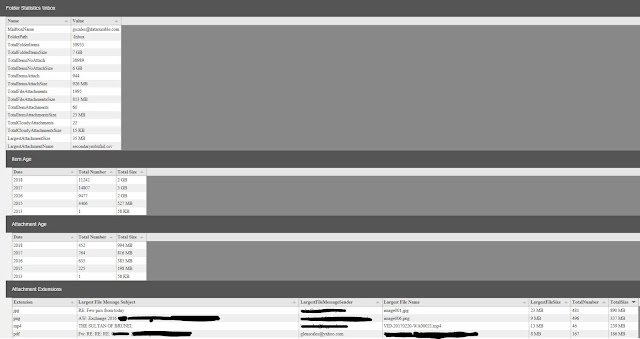 The report will be saved to the same path as the script module is located.

The regular version of the script can be found on GitHub https://github.com/gscales/Powershell-Scripts/blob/master/AttachmentStats.ps1

The cloudy version of the script can be found on GitHub here https://github.com/gscales/Powershell-Scripts/blob/master/AttachmentStats-Cloudy.ps1

The cloudy version will require the following EWS Managed API version https://github.com/gscales/Powershell-Scripts/raw/master/Microsoft.Exchange.WebServices.dll to be located in the same directory as the script module.

Hire me - If you would like to do something similar to this or anything else you see on my blog I'm currently available to help with any Office365, Exchange or Active Directory related development work or scripting, please contact me at gscales@msgdevelop.com(nothing too big or small).