How to log EWS Traces to a file in PowerShell

March 28, 2019
If your using the EWS Managed API in your PowerShell scripts and you need to do some extended debugging to work out why a script isn't working the way you expect in certain environments you can do this by using Tracing as described in https://docs.microsoft.com/en-us/previous-versions/office/developer/exchange-server-2010/dd633676(v=exchg.80) . What this does once it is enabled is it outputs all the requests and responses that are sent to and from the Exchange server so you can see exactly what is taking place and potentially more information on particular errors that are occurring.  So in a EWS Managed API script to enable this you just need to set the TraceEnabled property on the ExchangeService object to true eg 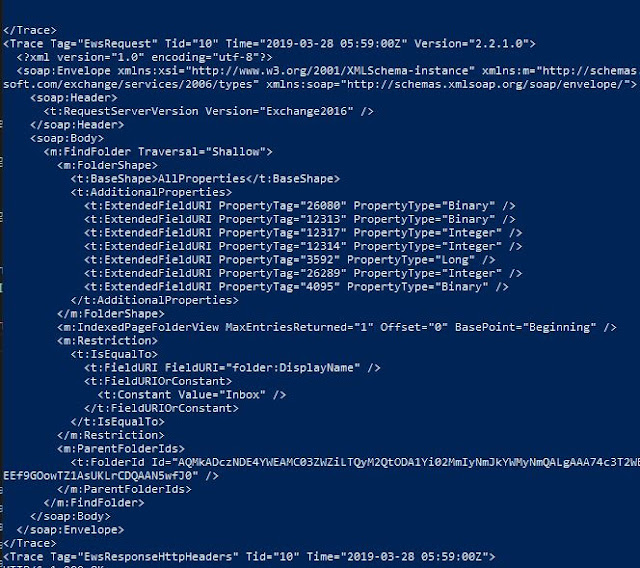 A much cleaner way of capturing these traces is to configure the EWS Managed API to use a separate log file to log them to a file so you can review them later. To do this it requires that you create a class that implements an Interface of ITraceListener https://github.com/OfficeDev/ews-managed-api/blob/70bde052e5f84b6fee3a678d2db5335dc2d72fc3/Interfaces/ITraceListener.cs .  In C# this a pretty trivial thing to do but in PowerShell its a little more complicated. However using Add-Type in PowerShell gives you the ability to simply define your own custom class that implements the interface and then compile this on the go which then makes it available in your PS Session. The basic steps are