Auditing Inbox rules with EWS and the Graph API in Powershell

May 01, 2019
There has been a lot of information of late from security researchers and Microsoft themselves about Inbox rules being used to compromise workstations and for use in more pervasive security breaches. One of the more interesting one is is https://blogs.technet.microsoft.com/office365security/defending-against-rules-and-forms-injection/

Which has a pretty nice EWS script https://github.com/OfficeDev/O365-InvestigationTooling/blob/master/Get-AllTenantRulesAndForms.ps1 for enumerating Rules, specifically they are looking for a Client side rule exploit so this script is enumerating all the Extended Rule Objects in the FAI collection of the Inbox. In Exchange you can have Server side rules which run regardless of the connection state of any client or Client only rules which only run when the client is connected for more information see https://support.office.com/en-us/article/server-side-vs-client-only-rules-e1847992-8aa1-4158-8e24-ad043decf1eb .

So what the above script does is specifically target looking for a client side rule exploit. However it will return both for Server and Client side extended rule object.

Exchange itself has two different types of rules Standard Rules and Extended rules, the later was a solution to the early Rule size issue that plagued Exchange in early versions.

Another interesting exploit for rules that released by the following researchers https://blog.compass-security.com/2018/09/hidden-inbox-rules-in-microsoft-exchange/

The exploit talked about in the above is about making a Server side rule hidden so it won't appear when you try to enumerate it with the EXO cmdlet Get-InboxRule (or it also won't appear in Outlook you change the value of the  PidTagRuleMessageProvider property on a  Rule object requires a little understanding or the Rule Protocol which is documented in https://docs.microsoft.com/en-us/openspecs/exchange_server_protocols/ms-oxorule/70ac9436-501e-43e2-9163-20d2b546b886 .

The important part of the document is https://docs.microsoft.com/en-us/openspecs/exchange_server_protocols/ms-oxorule/8d29f7cb-6508-4496-a126-0694e1cedc9e

but basically the value of this property is meant to determine who owns and who can edit, delete the rule etc and clients should honour this value and not touch rules that they don't own etc. So Outlook not showing you rules where the value isn't set to "RuleOrganizer" is its way of honouring the protocol and I'm guessing Get-InboxRule (also the EWS GetRule operations) is doing simular. The Rule protocol and storage is used in other functions like the JunkEmail Rule and Out Off Office in Exchange so these Rules also don't show up when using any of these API's or cmdlets which is another example of this protocol in action. Using the script from https://github.com/OfficeDev/O365-InvestigationTooling/blob/master/Get-AllTenantRulesAndForms.ps1 you can also track this exploit by including the PidTagRuleMessageProvider value in the result of the audit, I've created a fork of this script to demonstrate the simple modification necessary https://github.com/gscales/O365-InvestigationTooling/blob/master/Get-AllTenantRulesAndForms.ps1 . If your aware of the Hawk tool this also has some coverage for this https://www.powershellgallery.com/packages/HAWK/1.5.0/Content/User%5CGet-HawkUserHiddenRule.ps1 but this misses the mark at little in that it will find blank or null entries but this can be easily defeated by just setting your own custom value.

When it comes to enumerating Rules your first port of call would be using the Get-InboxRule cmdlet if your looking to do this vai one of the API you could use Redemption to do it via MAPI, for EWS you would use the InboxRule operation eg

The Graph API also has the follow operation for returning rules https://docs.microsoft.com/en-us/graph/api/mailfolder-list-messagerules?view=graph-rest-1.0

Both of the examples I posted just output the rules back to the pipeline in powershell so you would need to add further logic to test for the particular types of rule that you wanted to audit. For example with the Graph example to show only forwarding rule use

From a permissions perspective the EWS example will work either delegate permission assinged to the mailbox using Add-MailboxPermissions or with EWS Impersoantion.

With the Graph API the grant required to run this script is MailboxSettings.Read or MailboxSettings.ReadWrite these grants are only scoped to the current mailbox (no shared mailbox scope) which means for delegate access you can only use this against the current users mailbox. Even if you have delegated rights to another mailbox this operation will fail is you try to run it against that mailbox. There is however an application permission for MailboxSettings using this you could create an appOnly token that could be used to access ever mailbox in your Tenant eg see https://docs.microsoft.com/en-us/sharepoint/dev/solution-guidance/security-apponly-azuread or you could use my Exch-Rest Module which can do this also https://github.com/gscales/Exch-Rest/blob/master/CertificateAuthentication.md and there is a cmdlet in the module Get-Exr-InboxRules which will return the rules the same as the ADAL example posted above. 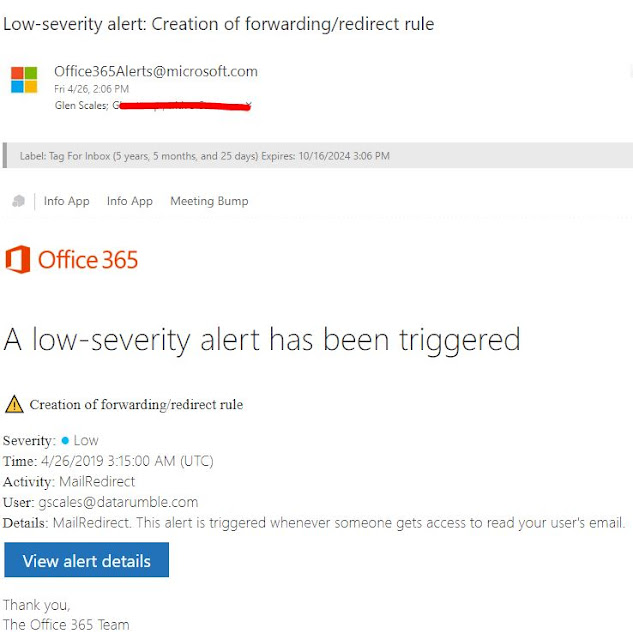 The protection console will then give you the details on the forwarding addresses that has been used. This is certainly a good mitigation but it doesn't work if you create Rules via Outlook and you also need be following up on these alerts. Other mitigations like making sure your watching your Exchange audit logs https://docs.microsoft.com/en-us/office365/securitycompliance/enable-mailbox-auditing which is the most effective way of picking up on all the rule update activity. Also keeping an eye on the Message Tracking logs to see changes in the Traffic patterns and large volumes of email going to a certain address and forwarding address reports if you have access under your subscription. As its been since the Melissa virus Messaging security is an area where you need a continuous build of scripts and practices to keep up with emerging threat environment.