September 06, 2008
For those brave souls who attended my MVP theatre talk on Friday here’s the OWA customization I demo'ed. The basics of creating custom forms are documented in the Exchange SDK . But putting this together can be a little tricky so let’s go though some of the basis’s step by step.

Firstly I wanted to create a custom form that would display a map of the contacts address information and also a Street-view of the same address information using Google’s new Streetview features that was recently released for Australia. For this I created some contact items with a Message class of IPM.Contact.Map.

To start the process of creating an OWA custom form for these items firstly you need to create a folder under the Forms directory on your CAS server. You should have a directory structure similar to this on your CAS server Program Files\Microsoft\Exchange Server\ClientAccess\Owa which represents the root of the OWA ASP.NET application. Under this directory is the Forms directory which is where you first need to create a folder to hold your customization e.g. I’ve created one called maps

Next there needs to be at least one file that goes in that directory which is the registry.xml file that contains the definition for your custom forms and what actions and pages to open. The actually content pages for your custom form can be located elsewhere but for my customization I’ve just used this folder which means that my pages are going to run as part of the OWA asp.net application and use the authentication from the OWAapplication pool. The Registry.XML for my OWA customization looks like

This basically means that whenever anybody opens/Previews or trys to print items with a MessageClass of IPM.Contact.Map the file map.aspx will be used. At this stage you should pause and consider the application pool this custom form is going to be running under. Writing poorly performing code that runs under the OWA application pool is going to make OWA performance poor for everybody using the server. This is something you need to give serious consideration before putting any OWA customization into production.

But before that I had to address one final issue which was security because I was going to be making a request to EWS from within another webpage I need to ensure that the security context used to make this request was that of the users that was logged onto OWA. To do this impersonation needed to be set as per http://support.microsoft.com/kb/306158 within the code behind file.

Okay so the final task now is just to copy the map.aspx and map.aspx.cs file into the map directory in the forms directory and then do an IISReset for Exchange to pick up the changes. If you want to see if Exchange has loaded you custom form check the application event log for an event

The code itself in the map.aspx.cs file does the following tasks firstly it takes the OWAid and Email address from the querystrings OWA passes to custom form. This information is then used to do a EWS convertID to convert that OWAid into a EWSid so that contact Item can be open in EWS using a GetItem call and the address properties can then be accessed. Next the address details are geocoded meaning it gets the longitude and latitude values for the address which are then used to send a request of to Google Maps for the Map and Street View of this address and then the result are display in couple of divs on the aspx page. The final result looks something like this to use Google Street View you need to register for you own API key (which is free) http://code.google.com/apis/maps/signup.html and change the following line

I’ve put a download of the aspx and registry.xml here the customization in action looks like this (for all those blues brothers fans) 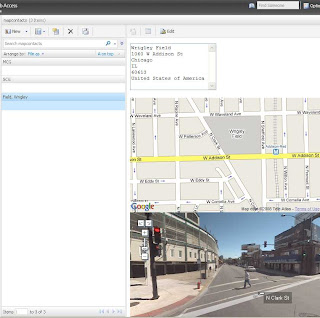 January 19, 2018
Quite recently the Reporting side of the Graph API has moved in GA from beta, there are quite a number of reports that can be run across various Office365 surfaces but in this post I'm going to focus on the Mailbox related ones. Accessing Office365 Reports using Powershell is nothing new and has been available in the previous reporting endpoint  https://msdn.microsoft.com/en-us/library/office/jj984326.aspx however from the end of January many of these cmdlets are now being depreciated in favour of the Graph API  https://msdn.microsoft.com/en-us/library/office/dn387059.aspx . Prerequisites  In comparison to using the Remote PowerShell cmdlets where only the correct Office365 Admin permissions where needed, to use the new Graph API reports endpoint you need to use OAuth for authentication so this requires an Application Registration  https://developer.microsoft.com/en-us/graph/docs/concepts/auth_overview  that is then given the correct oAuth Grants to use the Reports EndPoin
Read more